While there has not been a single Avalon ASIC bitcoin miner device seen in production by any independent person or organisation Avalon are pushing ahead with their plans for the sale and production of a second batch. 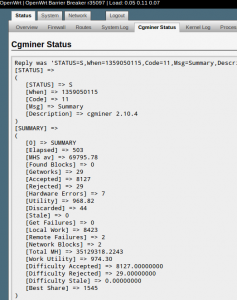 In a mail out earlier today Avalon reviled their new, as yet unfinished launch web site as well as a few technical details about their currently shipping devices and a screen shot of OpenWrt running cgminer (pictured to the right).

Furthermore according to BitSyncoms(Yifu G.) latest post batch 2 will consist of 600 units to add to the original (and undelivered as of yet) 300 from batch 1 and the power consumption is coming in at a hefty 6.6 \~ 6.7w per Gh/s.

There does seem to be some cause for concern though, BitSyncom has gone on to detail their "Bitcoin Only, No Refunds, No Proof" policy for the second batch;-

BitSyncom does so on to say that there will be a trade in value for their older FPGA products, \$200 for the Iracus FPGA and \$300 for Lancelot FPGA.

While the second batch is not scheduled to ship until March or even April it is necessary for Avalon to start to take pre orders now because as BitSyncom says;- "So, we have a problem. Avalon need the money before this weekend starts to place orders for the parts."