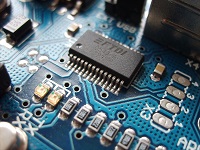 Every now and then I read something that I think is inspired. In this instance I came across a reddit post by someone going by the handle of foolish_austrian.

His expertise and unique look on where bitcoin mining may be in the long term really captured my imagination and I thought readers may enjoy his far off vision of where mining may lead is in the future. So, without any more from me, here is the [not so]foolish_austrian;-

"As someone who comes from a physics and engineering background, over the long run I'm not concerned with mining centralization. Physics will ensure it is distributed.

To qualify, I think there will be strong ebbs and flows while we catch up to Moore's law. During the next few years, hardware is simply going to depreciate too quickly.

Around the year 2024, we are expected to hit the quantum mechanical limit, which broadly speaking means we will have perfected the silicon transistor to the atomic level. If we make them any smaller, they become transparent to matter. (Incidentally, I work on replacements for transistors that use the angular momentum of electrons to store data).

As we approach this limit, mining hardware is going to depreciate over years, not months. When this happens, the dynamics of mining investment will substantially change. Mining in Greenland with cheap energy and cool climate will actually be more expensive than decentralization. Actually, the profit from mining will go negative, Greenland mining will become impossible in it's current form.

What mining does is convert electricity to heat, but not just any heat... specifically something between 90C to 120C, or heat around the boiling point of water. This heat density is too low for most industrial uses, except possibly things like water purification. It cannot be used for smelting, semiconductor processes, or anything that requires very high heat density without a heat pump.

As a result, what do you do with the enormous capacity to produce \~100C heat? For discussion sake, I'm going to address residential and industrial water heaters, although you could imagine other similar distributed use cases for small amounts of heat.

I just ran over to Sears website and checked the EnergyStar rating on water heaters, and found the average to be about \$300/year. According to the US census there are approximately 115 million households in the United States. This means there is about a 34.5 Billion dollar market for electricity to heat conversion. Since 100C (semiconductor temperatures) is just about right to heat water to 55C, this is an absolutely natural market for bitcoin mining.

One could vaguely argue that with limited industrial uses and expanding worldwide, we could take the 34.5 Billion dollar market and multiply by about 5x to estimate the worldwide market. That puts the total market for heat conversion at just under 2 trillion.

Now for the economic argument. In a stable and predictable market (i.e. post superexponential growth), the profit from mining is going to be capped by the marginal cost of mining... ALWAYS. This means that anybody who can 'recycle' heat can afford a negative marginal cost, and therefore mine at a loss. The profit from mining will be negative. Simply speaking, approximately 2 Trillion dollars worth of heat can be produced in the mining of bitcoin, and 'sold' to the homeowner to heat water.

There are many possible incarnations of this, but we could imagine a water heater with a heater 'rebate'. Electric power companies could act like mining pools. Since the marginal cost of mining for anyone not recycling heat is negative, the total profit from mining goes negative... It would require more than 2 Trillion dollars worth of electricity to be produced for free. (more than because of additional cooling costs required in a data center).

As a result, the mining centralization we see in Greenland and large data centers becomes enormously unprofitable. Any centralization of mining would REQUIRE heat recycling, which severely limits data centers and necessitates distribution unless you introduce heat pumps, which also increase cost.

So this leads to a new threat for centralization... mining pools operated by Electric Power companies. However, electricity production and distribution is inherently a geographically localized industry (you cannot cheaply transmit electricity across long distances). Therefore the number of power companies are likely to remain much much higher than the number of mining pools today. In addition, since nation-states distrust each other, Most want their own power generation. This makes at least 196 natural divisions.

Thankfully small amounts of heat is something that is needed every season, in every country, in every household worldwide. Data center heat is useless...

Also, 2 Trillion is a huge market for security :-)