About a month ago I received a pleasant email from a gentleman named Stas, he complimented me on MinePeon and asked me if I would have any issue if he included all or parts MinePeon on a new range of miners that he was intending to bring to market.  I told him, as I always do, he was free to use MinePeon however he wished.

When I first built MinePeon over a year ago it was intented as a hobby that would be free for anyone to use and learn about bitcoin, mining and Linux in general.  It has evolved a lot since then and it will be evolving even more in the future but I have always been pleased when people use it and I invite anyone to use it as if it were their own.

Stas thanked me for my permission (not that he needed it) and offered to send me a unit when it was ready for review and I gladly accepted......  Little did I know what I was in for, people have occasional sent me a USB miner or two to help with MinePeon support but it was only last week that I found out what Stas and his company Spondoolies-Tech were truly up to!

I was first aware of what I was about to receive when Spondoolies-Tech's  announced it on BitcoinTalk and Stas sent me a "head's up" email.   Along with the unveiling their website, they announced that (in contrast to what seems to be the norm with bitcoin manufacturers) they had actually designed, prototyped and started to produce two new fully self contained bitcoin miners.

Anyway enough of how I got one, let's get on to part one of the review.

First, you may wish to have a look at Dogie's review on BitcoinTalk, he has done a tear down of the miner and has quite some expertise in the physical characteristics of hardware and I am not going to try to replicate his findings.

Shipping was via DHL Express (I am told that all shipping will be express) and took 7 days all told to arrive in New Zealand.  Believe it or not that is actually quite good for large shipments like this to get all the way down here to the end of the earth.  The entire package was 14 KG (just under 32 pounds for the metrically challenged).  The packaging as you will see in the photo below is a heavy-duty corrugated cardboard making it not only quite secure and light but quite eco friendly. 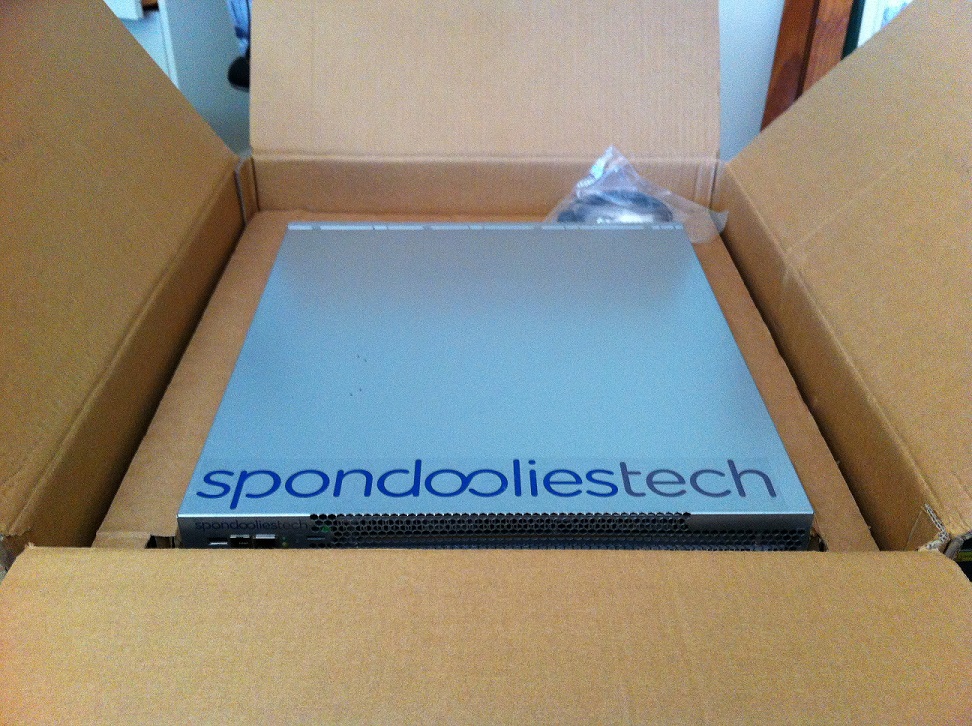 SP 10 box opened and upper layer of corrugated cardboard removed showing the front of the miner and the "spondooliestech" branding.[/caption]

After pulling the miner free of the snug packaging and turning it around to show the back you will see 6 small diameter fans as well as the server grade removable power supply.

Closer inspection (pictured below) of the front of the miner you will see a USB slot (apparently soon to be used for a wireless dongle), a serial console port (useful for resurrecting dead miner from failed upgrades and other disasters), a 10/100 Ethernet port, two LED's, a recessed button and finally a slot for a MicroSD card to be used for upgrades and recovery.

The top of the two LED's is a "Power On" lead and the one below it is a "Blink" LED that you can enable from the WebUI to help you to find your miner if it is in a rack cabinet among other, identical miners.

It is important to note, these LED's and port's are all on a single board that acts as the controller for the miner.  The controller is modeled after the widely available BeagleBone Black ARM7 device and while not being exactly the same in physical layout (the extra LED's, RJ11 console port and button for example) it is functionally identical.  So much so the BeagleBone Black version of MinePeon boot's without modification (it does not run the miner yet).

The "controller board" part of the miner.[/caption]

Another feature that I would like to point out is the server grade Emerson DS1050 swappable power supply pictured below.  It is rated to 1050 Watt's and in actual use the entire unit is pulling 1388 watts at New Zealand's 230 volts at the wall, the total power consumption being below a respectable 1 Watt per GigaHash.

Together with the cooling fans the unit produces a whopping 76 DB of server whine.  While this is nothing unusual for rack mount equipment it is certainly nothing you want sitting in your living room (or garage if it is not sound proofed).  It is remarkably simular to listening to a Boeing 747 engines at idle when parked on the tarmac. 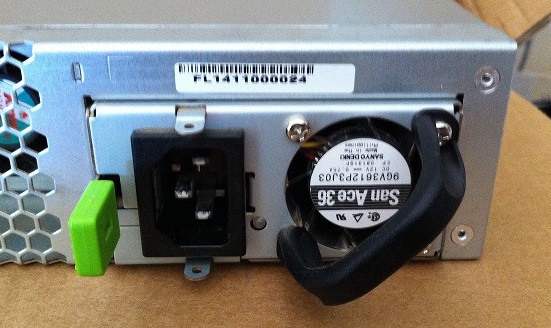 Finally, there is a small plastic bag included in the box that contains a 8GB SD Card, a USB console cable to be used with the mentioned console port and 4 rubber feet for use if you are not planning to rack mount the device. 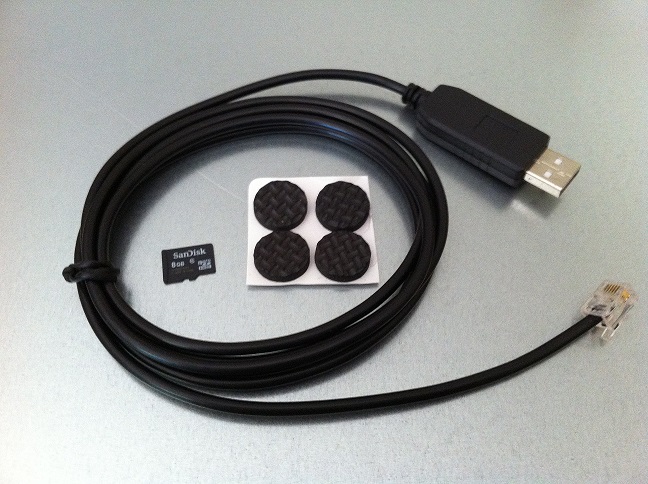 The extra bits included in the box[/caption]

Installation of the unit was very simple, there are only 2 cables necessary for operation, a network cable and a power cable.  After that, configuration will be very familiar to MinePeon users, all you need to do is login to the WebUI (username admin password admin), set your pool and you are done.

All told, once I worked out the right username/password combination (minpeon uses something slightly different, minepeon/peon) it was up and running in minutes.

A quick look at the (very familiar MinePeon) status page it told me that the miner was purring along at 1.49 TH/s .

I am going to end the first part of the review here.  I was intending to do a full explanation of my findings about the OS but I soon realised that there was a lot more to cover than I can do in just the single day since I have received the unit.

At the moment I plan to do two more articles, in the next I will be doing a tear down of the operating system, kernel, supervisory processes, mining processes (cgminer) and user interface (all released as open source).

Quite a bit of what is there was written by me and is part of MinePeon but there is also a lot of Spondoolies-Tech code that looks very nice and I will be taking a closer look at.  In particular, instead of starting with Arch Linux as a base as with MinePeon they have built their own linux distribution under there to support their drivers and modules.  Using a custom build OS can be a bit of a two edge sword, the OS is cut down and very purpose driven (somthing I like alot) but may be a bit daunting for casual coders to work with (I hope to ease that somewhat).

In the final part I hope to bring you a bit more information about Spondoolies-Tech, how they intend to do business and what their future plans are.