In the previous part of this review I discussed how I ended up receiving my Spondoolies-Tech SP10 Dawson.  This time around I am going to go a deeper into the Operating System that runs Spondoolies-Tech miners.

The SP10 Dawson comes with a modified version of the MinePeon user interface that is freely available for download on github.

MinePeon users will already be familiar with parts of that they see on Spondoolies-Tech miners but the Spondoolies team has been hard at work and have customised the User Interface and done a full rewrite of the underlying Operating System, I have to admit, I really like what they have done and with their permission I will be porting a lot of what is there back.

The first Spondoolies-Tech addition is that instead of having to hunt for your miners IP address they have come up with an elegant solution where all you need do is go to their management interface page (http://start.spondoolies-tech.com/) and your miner should have already reported in and given basic details so that you can access your miner;-

The site will display you public IP (I have blocked mine out), the IP of the mining device on your local network, the firmware version you miner is running, the last time your miner contacted Spondoolies-Tech and finally a link to your miners WebUI.

Option to turn off Device Registration.[/caption]

For those that are worried that this might be an information leak about you and your network this "reporting in" can be turned off on the settings page with a simple check box.

Further digging shows that you will find this registration script in /etc/cron.d/pandp_register.sh on the device.  The only extra bit of information that is included in the registration is the board ID (mine is FL0914990010) and that is there because it is necessary to work out what firmware version you require.

Disabling Device Registration does exactly that and your miner will never contact Spondoolies-Tech again unless you ask it to (i.e A firmware upgrade request).

Once you have located your miner (via the site provided or from your DHCP server on your router) and entered it's IP into your web browser you will be greeted with an Apache Auth dialogue box asking for your user name and password, it even will tell you the default username and password for the device (admin/admin, I recommend you to change it on the settings page ASAP).

After entering your credentials you will be taken directly to the main "Status Screen" for your miner.  This will be familiar to MinePeon users but for new users it is a snapshot of what your miner is up to including a graph, general information about version of software your miner is running, details on how your miner is interacting with your pool (or pools) and of course the statistics from your miner's ASIC's. 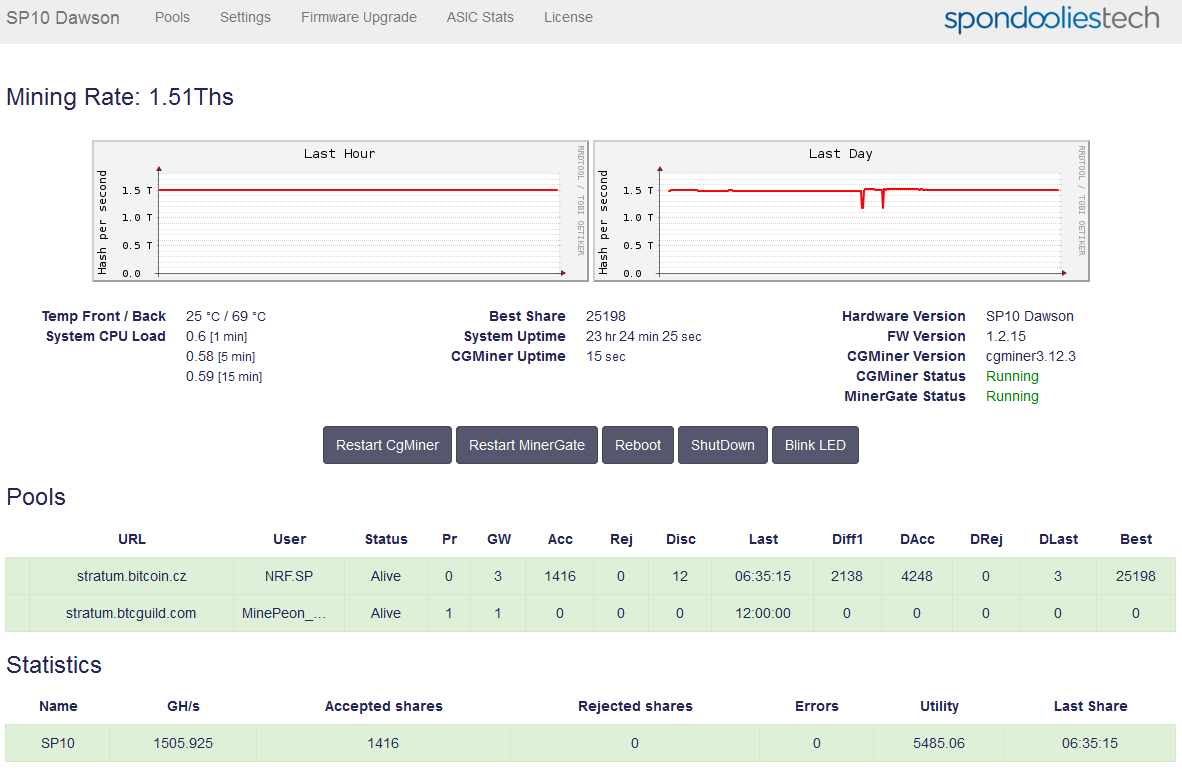 Included are buttons to restart cgminer, Miner_Gate (the supervisory process for the SP10) as well as buttons to reboot and shut-down the entire miner.  It should be noted that the statistics from the mining device is not pulled from the cgminer API as MinePeon does but it is pulled directly from the mining hardware.

For some unknown reason (I am working to work out why) cgminer and the pool disagree how many hashes per second the SP10 is doing.  It has something to do with the driver and it is being investigated but for the time being pulling the hashrate direct from the device is the best way to get what your miner says it is doing and what the pool says it is doing to match.  Rest assured though, if it says 1.51 TH/s at the top as mine does, that is what the pool is paying you for (I checked).

The next screen you should visit is the pools screen, as far as I can tell it is an exact copy of the MinePeon one with no changes.  You should get in here as fast as possible so you can set your own pools up.

Everything here should be self explanatory.  You can use my pools as an example (feel free to use my pools even).  If there are not enough pools to fit your needs just add a few and submit them and the page will add a few extra blank entry's at the bottom so you can add more.

Once you have entered your pool information you will need to pop back to the status screen and check that they are running.  If it is reluctant to change to your pools you can use the "Restart CgMiner" or  "Reboot" buttons.

The settings page, while being similar to the standard MinePeon page has settings particular to the SP10 Dawson and has removed the more generic settings that don't apply.  Below I have taken screenshots of the new options and have briefly described what they do.

If you find your miner is too noisy or takes too much power you can switch down a gear at the cost of your hashrate.[/caption]

Something I have yet to bring to MinePeon standard, you can turn off DHCP and set a static IP address.[/caption] 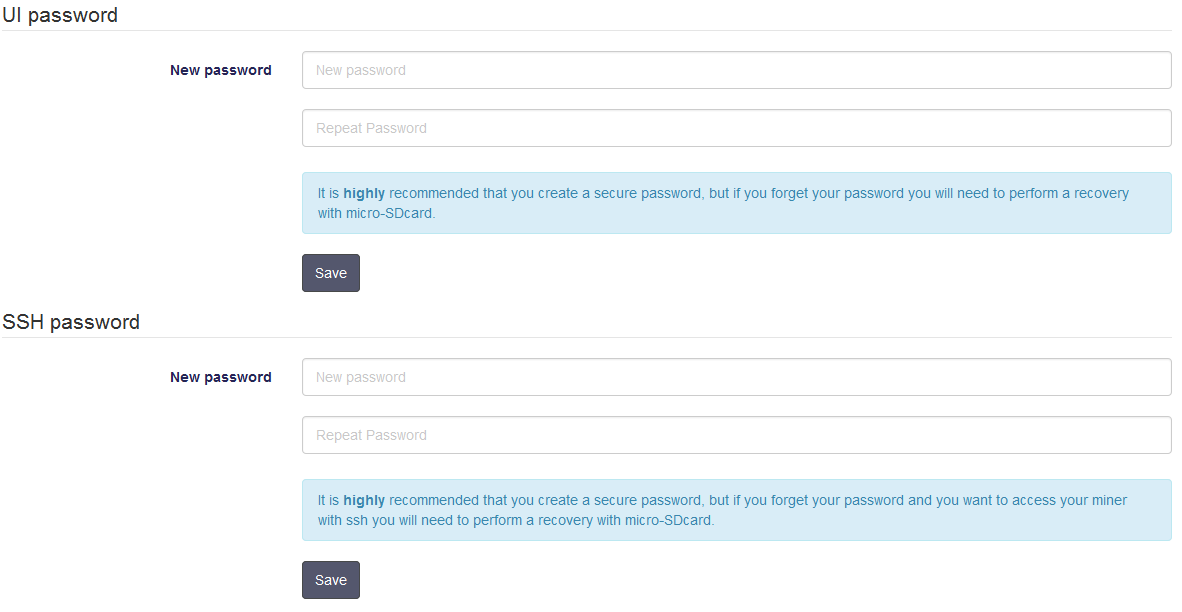 Spondoolies-Tech have added the option to change your SSH password as well as your WebUI password from the WebUI. It is very much recommended you do both.[/caption]

Option to limit the power draw of the Power Supply[/caption]

Finally, Spondoolies-Tech has added an option to set your miner back to the factory defaults.[/caption]

The Firmware Upgrade page is very simple to use.  Upon entering the page there is only one button labelled "Upgrade Now" and pressing the button will contact Spondoolies-Tech to check if there is an update.  If an updates is available it will download and install the update as I have pictured below.

I know from experience that getting updates to work every time is something that is difficult to do but after looking at Spondoolies-Tech's method I have to approve.  Even if there is an issue (such a power cut during the update) the Recovery Image available on the technical blog seems to work flawlessly.  Just so you don't have to, I even tried it by pulling the power half way through an upgrade and it recovered my SP10 just fine.

The final page I would like to show you is their ASIC status page.  Here you can view detailed information as to what each of your 192 (numbered 0- 191) individual Hammer ASIC's are up to.  This is a level of detail that I have not seen before in ASIC manufacturers and while not being very much use to the average user it provides a great deal of information for debugging. 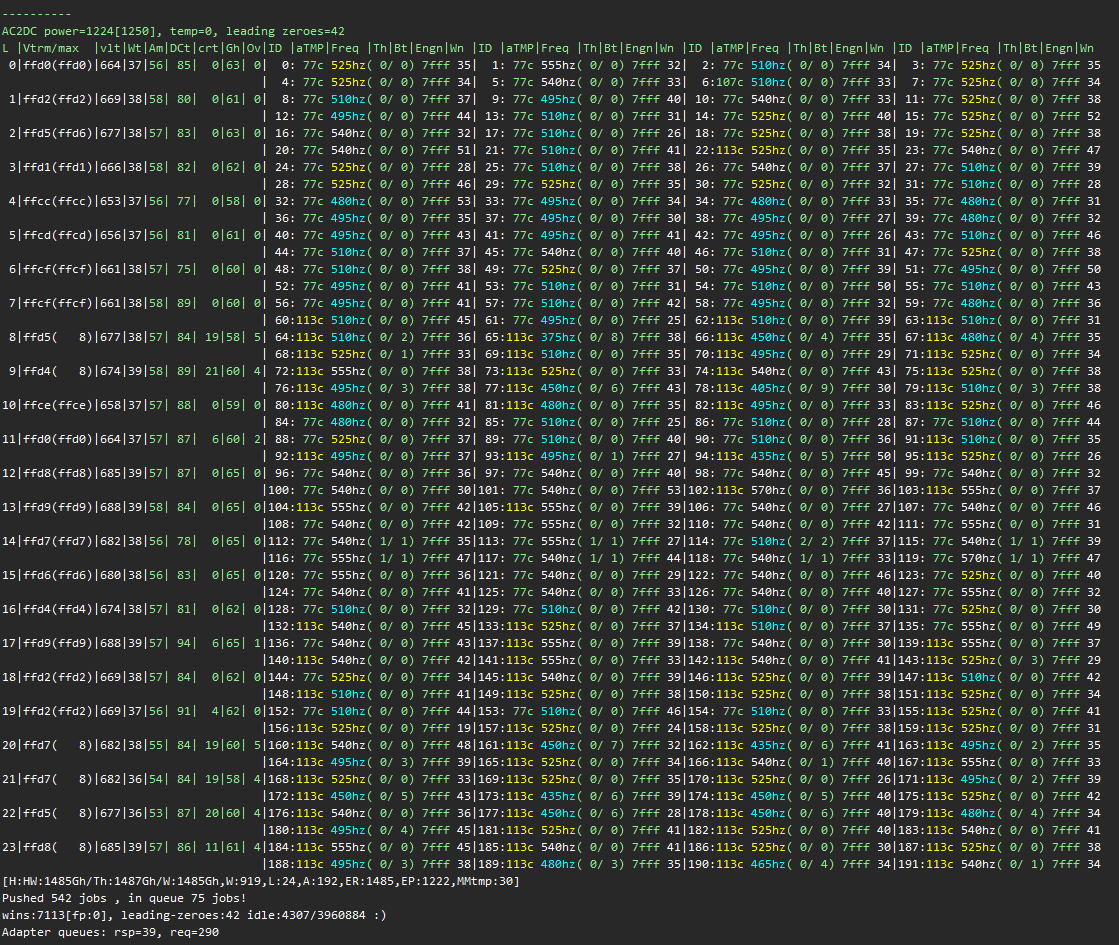 Spondoolies-Tech have been very generous and open with their sources, if you checkout their GitHub Account you will find repositories for everything you will need to build your own "Spondoolies-Tech Miner" if you wanted to.  You will find repositories for their Custom Linux Kernel as well as the uBoot needed to boot it.  Their version of cgminer is also available to download.

They have even released their propitiatory Miner_Gate software as open source for inspection.

Conclusion (So Far): I am very impressed with what Spondoolies-Tech has done, they have offered me (and any who care to look) unparalleled access to their software and their version of MinePeon is something they can be proud of.  Their custom Operating System is well written and looks to be very stable.  A lot of what they have done to extend MinePeon will be making it's way back to the standard distribution and they have given me access to their systems so that I may also bring new MinePeon features to Spondoolies-Tech users.

After doing a through crawl thorough the software (far more thorough that the "reader friendly" version above) I can find few faults in what they have done and those fault's that I have found Spondoolies-Tech have already fixed or are in the process of fixing.

Additionally their policy of only selling technology that they have in hand instead of burdening their clients with pre-orders to fund themselves is a refreshing thing in today's bitcoin economy.

What they have done so far is impressive, I look forward to seeing what they will come out with next!