It has been less than a week since user 67117 started bitcoin mining at BTC Guild at 800 GH/s .  It was no surprise when it was later revealed to be ASICMiner bringing their new ASIC bitcoin miners on-line.

What has come as a bit of a surprise (at least to me) is how fast they are managing to deploy their farm, in the past 4 days their hash power has steadily grown from the original 0.8 TH/s to the current 2.7 TH/s.  That is an increase of 330%.

If you look at the graph below provided by http://bitcoin.sipa.be/ you will see that it adds up to a new record for the bitcoin network at just under 30 TH/s. 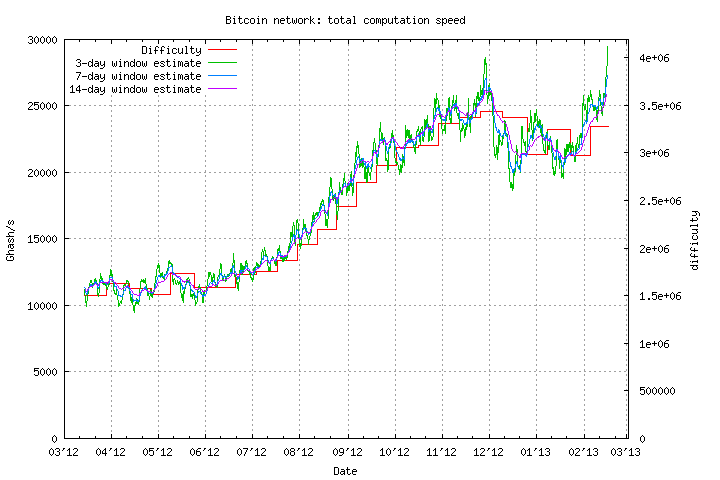 The increase of hashing power is more than ASICMiners 2.8 TH/s though, so it seems that the with current MtGox price at \$26.88 USD it has encouraged some miners to turn their GPU rigs back on.  The next difficulty change is due change in the next 24 to 48 hours from 3,275,465 to somewhere close to 3,600,000 though, so don't expect those GPU's to stay on for long.

Meanwhile the competition is lagging behind or nowhere to be seen.  Butterfly Labs are yet so send out a single ASIC and Avalon's total devices in the hands of miners is still two despite having started shipping just under a month ago.