Being the author of MinePeon the Linux mining appliance for the Raspberry Pi usually involves late nights debugging strange errors submitted by one of it's thousands of users, compiling software and upgrading packages.  While it is far from a thankless job, every now and then the perks are even better.

A few weeks ago Beastlymac from Big Picture Mining approached me to collaborate on getting support ready for his new BlueFury mining devices built into MinePeon, I of course jumped at the chance.  I quickly produced a few test images of MinePeon using both cgminer and bfgminer that were successfully able to drive the device. 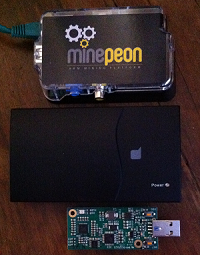 Job done I thought, and then Beastlymac offered to send me an early 'developer version' so that I could maintain support.  I jumped at the chance.

Today it arrived so I pulled a new Raspberry PI out of its box, wrote the current development version of MinePeon 0.2.4 PR2 to a SD card, plugged it all in and set it going.

Within seconds and the small addition of "BPM:all" to bfgminers start up command it was hashing at a respectable 2440.925 MH/s (2.4 GH/s).  I have yet to get it working with cgminer but it is only a matter of time now. 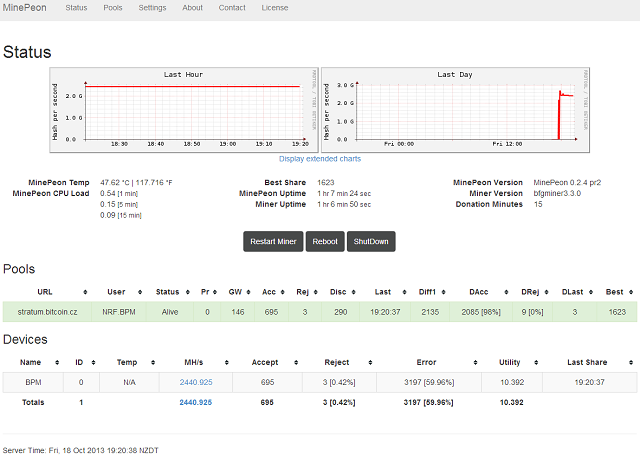 NOTE: As I said, this is a development version, the full production BlueFury devices expected any day now will look slightly different and have different performance characteristics.